Ever since we got Akira, we have been trying all different types of toys to try & entertain them both.

Here are some of the toys they have & my view on if it was a waste of time & money: 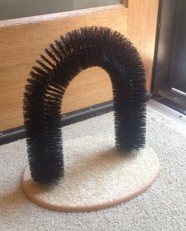 Our most recent cat toy purchase was the Homebrite Kitty Arch from eBay for roughly $25.00 – $30.00 . Fergus has adopted this toy & will not let Akira near it. He love’s to go and rub up against the arch. Fergus love’s to be brushed, so this sort of acts like that for his chin, cheeks & head. Combined with me brushing him & he is in HEAVEN! There is the addition of a hole in the base to put some cat nip, both of our cat’s really do not like cat nip so we have not added this to the arch. I’d recommend this for you if your cat like’s to be brushed. Over all it is was a worthwhile purchase. 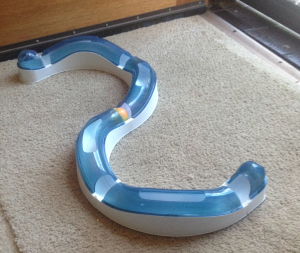 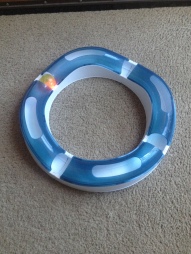 We looked up a lot of reviews & videos on YouTube before we purchased the Catit Senses Play Circuit. We got it on eBay for roughly $35.00. We saw the majority of reviews said their cats liked this toy & so decided to get it. The cats like to play with this toy every now and again, but they don’t play with it all the time. The brilliant thing about this toy is if your cat does like it, you can buy another one & join them all together. So an ok purchase, but we have other toys they prefer more.

We purchased the Smartcat Peek a Prize Toy Box from Pet Circle for $68.95. Expensive but worthwhile. Akira loves this toy. It come’s with two little foam balls & she love’s trying to get them out of the box. We have added a few other balls, a mouse & sometimes some little cat treats she love’s. This is expensive, if you have the skill to do a DIY box to save money, do it! All in all, worth the money for us as Akira loves this toy.

We got these for roughly $2.00 – $3.00 each from a dollar store. They are cheap, make you interact with your pet, helping you build a bond & they love it! if they break we don’t get upset about it because they are so cheap to replace. Good cheap toy. 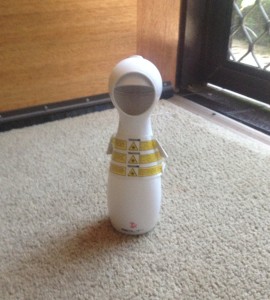 the Bolt Laser Toy cost roughly $30.00 -$35.00 from eBay. It has two settings. A pre programmed setting so you can sit it down & let it do it’s own thing & the manual setting so you can move it all around for kitty to chase. I find they get bored with the pre programmed setting, but keep them occupied for a little while. They love it when we do it manually and they don’t know where it is going to go. Fergus get’s very intense during what we call “Laser time”, it takes Akira a little while longer to get her to follow it & is not nearly as intense as Fergus. Worthe the money, best used if you are involved in the “laser time”.

Last but not least for now: Hair Ties:

The hair ties with no plastic bits or bows. Super cheap for a large packet of them. Akira loves it when Mark flicks the hair tie across the floor & she will then go & pick them up and bring them back to him.

What are your cat’s favourite toys?

One thought on “Cat Toys Review”